If intelligent life without sight exists on some distant planet in our galaxy, these lifeforms would still explore the universe; how? This is a guiding question for Innovators Developing Accessible Tools for Astronomy (IDATA), a research initiative supported by the U.S. National Science Foundation – STEM + Computing Partnerships (STEM+C) Program.

Modern astronomy relies on computers and computational thinking for nearly every aspect of collecting, analyzing, and presenting data. Visual interfaces commonly used for these computational processes present unique challenges for blind and visually impaired (BVI) individuals. While BVI individuals are severely underrepresented across all fields of science, technology, engineering, and mathematics (STEM), the lack of vision-neutral tools in astronomy further increases the barrier-to-entry for BVI individuals.

Students learn computational thinking (including elements of the Quorum programming language) and about the role of computation in scientific exploration, as well as astronomy content. SEEC’s research focuses on these learning goals, as well as student interest, sense of efficacy, science+computing identity, and their beliefs about who can do science and computing. IDATA project investigators from Associated Universities Inc., Geneva Lake Astrophysics and STEAM (GLAS), Inc., TERC’s STEM Education Evaluation Center, University of Nevada Las Vegas, and Skynet at University of North Carolina at Chapel Hill, hypothesize that teaming up BVI and sighted students, teachers, and professionals in the design and development of astronomy software and instructional modules will result in more accessible tools for astronomy investigations, powerful educational experiences, and lower the barrier-to-entry for BVI (and all) individuals interested in astronomy and related careers. 2019 STEM for All Video Showcase 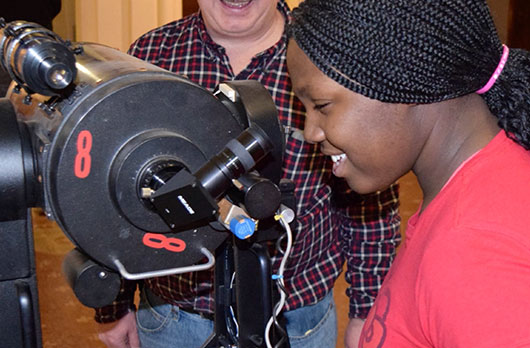 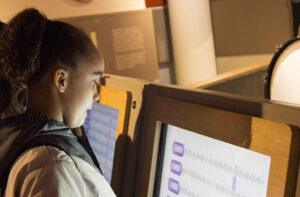 Reaching Across the Hallway

BCSER: IRM: Institute for Meta-Synthesis: A Practicum through the Lens of STEM Equity and Inclusion Literature (IMS-SEIL)