Scale Diagrams as a Testing Strategy and a Teaching Opportunity

The end of the calendar year is the season for HSE testing, so I’ve had a lot of students looking for test prep recently.  Every practice test seems to include at least one Pythagorean Theorem question with an accompanying diagram, like the one below:

Sarah has to drive from her home to the post office, then on to the grocery store before she returns home.  She will travel on the roads shown below.  How many miles does she drive altogether?

It did not surprise me that my students mostly didn’t recognize that this problem could be solved with the Pythagorean Theorem, since I had not yet taught them this.  I was surprised, however, at how few students attempted to estimate the missing side in order to come up with a reasonable distance for Sarah’s trip.

While not all diagrams on tests and in textbooks are drawn to scale, many are, and this can be a valuable reasoning tool.  (Often, diagrams that are not to scale are labeled “not to scale.”) I decided to try to assess students’ propensity and ability to estimate a missing side on a scale diagram. I gave 16 adult basic education students (of all reading and math levels) the problem below: 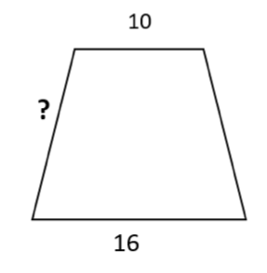 Estimate the length of the side with a ?, and explain how you came up with your estimate.

Of the 16 students given this question: 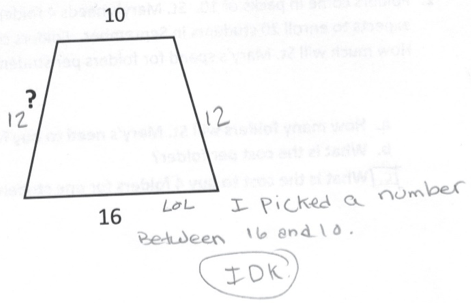 Of the 14 students who answered the post-assessment question:

The results of this informal data suggest that a relatively minor intervention (1 hour of instruction) led to improvement for a significant number of students in their ability or willingness to use proportional reasoning to estimate the missing sides on scale diagrams. This could help them both with test taking as well as geometry instruction, since the ability to estimate reasonable lengths can help students make sense of geometric shapes, quantities, and formulas.

The relatively high incidence of students who were able to come up with a reasonable estimate, but felt the need to qualify that they didn’t know or weren’t sure, suggested to me that many students didn’t so much lack the ability to estimate proportionally, but were not aware that this was something they were “allowed” to do in math. A few of the students who got unreasonable estimates did so by improperly adding or multiplying, probably remembering that these are things they were often asked to do (for area and perimeter, perhaps) and did not recognize or were not bothered by the fact that the resulting numbers made no sense.

As teachers, we should let our students know that it is appropriate and encouraged to use spatial and proportional reasoning to estimate with scale diagrams. This will improve their comprehension of geometry concepts, push their proportional reasoning, possibly lead to better test taking, and hopefully, above all, reinforce the idea that mathematics is about making sense of our world.

Melissa Braaten is an adult education instructor at Catholic Charities Haitian Multi-Services Center in Dorchester, MA. Melissa has taught ASE and pre-ASE math and reading, as well as ABE writing, computer skills, and health classes. Melissa also is a training and curriculum development specialist for the SABES PD Center for Mathematics and Adult Numeracy at TERC.