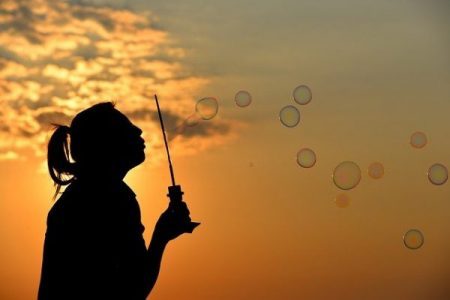 Adults have so much fear and dislike related to math, much of it rooted in their prior school experiences. We as math teachers need to think about our role in why so many people feel this way about math, and what we can do to change this. Here’s one thought: lighten up! Maybe we need to be a little less perfectionist, and a lot more flexible.

What got me on this blog topic? A couple of things that struck me wrong:

Recently, I was with a couple of friends chatting in a room that also serves as my office. One of them, a very intelligent woman who has spent years working in a doctor’s office, said, “Could you please turn that book around?” I looked around, dumbfounded. Which book? Why? She pointed to one with the word “Algebra I” on the spine. I realized that reading the word algebra had made her upset. I can’t even imagine the memories it conjured up for her. Clearly they were damaging enough that she was affected even years later.

The second thing happened as I was reviewing a video of a class I had taught a couple of years ago. I was introducing some simple math vocabulary to a class of ESOL students. When I got to a point when I wanted to introduce the terms ‘width’ and ‘length’, I almost panicked. I suddenly recalled a situation in which I was introducing an area model to a group of teachers during a professional development session. I wrote 6 x 9 on the board, quickly drew a rectangle, and labeled it. Evidently, there is a hard, fast rule that the longer side is always the horizontal part and the shorter is the vertical side. I drew my rectangle with the longer side up and was then publicly chastised by one of the attendees in front of the group (who had no clue what she was referring to). I had always thought of a rectangle as having length and width, but I thought I could turn the rectangle on its side or stand it up without making a difference. After all, the orientation of the shape wouldn’t change the perimeter or the area. But apparently, I was wrong… at least according to this math teacher. I realized I had been simultaneously re-living that dreadful experience in that training session with teachers as I was teaching the student lesson years later.

Despite the unfortunate math flashback, I had been able to push through the lesson. I had focused on the fact that I was teaching the students vocabulary such as wide and width, long and length; I wasn’t expecting them to turn into mathematicians overnight. I also reflected on that fact that I have done lots of carpentry, paneled entire rooms, created pieces of furniture, and never once was concerned about whether I was looking at the length or the width. In fact, I’ve probably used those concepts much more than the math teacher who criticized me for not being precise with an abstract model.

As I continued to watch the video of myself, I also remembered that I had introduced the concept of a rectangle by using the term corner rather than right angle. My reasoning was that I needed to connect to language that the students already might be familiar with and that they would use in the real world (after all, I’d been told to stand in the corner when I was in trouble in class, but no one had ever said to go stand in the vertex). But, I started to second-guess myself. Was I a bad teacher because I didn’t immediately begin with the precise language used by mathematicians? Should I have stuck to the terms without attempting to offer a mental association for the concept?

Yet, there must be something about the way math is traditionally taught that causes so many people to have negative feelings about it. I had mentioned to a friend about how so many adults dislike math. He didn’t believe me. So, as we shopped in several stores together, I made it a point to casually mention something about math to each of the cashiers. Every one had the same negative reaction. Why? Is it something we have done as teachers? More importantly, are there things we can do to make the math learning experience better for the adult learners we serve? I think, to start with, we need to lighten up!

Donna Curry is an educator, curriculum developer and professional development specialist with nearly 40 years of experience in adult education. Her work has focused on math standards development at the national level (Equipped for the Future National Standards and Standards-in-Action projects) and at the state level (including states such as Rhode Island, Washington, Oregon, New Jersey, Oklahoma, and Ohio). She has also worked on the National Science Foundation’s EMPower project and served as co-director for the NSF Teachers Investigating Adult Numeracy (TIAN) project. Most recently she co-developed and implemented the Adult Numeracy Initiative (ANI) project and Adults Reaching Algebra Readiness (AR)2. Donna is the Director of the Adult Numeracy Center at TERC and currently directs the SABES Mathematics and Adult Numeracy Curriculum & Instruction PD Center for Massachusetts.