A huge international study of adult literacy and numeracy skills (Program for the International Assessment of Adult Competencies, known as PIACC) showed that in the U.S., 30% of adults had numeracy skills at or below level 1, which means they could only perform the most basic, single step, whole number operations.1,2  This could impact the lives of adults in many ways, but one that has recently caught my attention is the role of numeracy in health care, and specifically diabetes management. I am a math educator and professional developer, and I am familiar with how often I use math and mathematical reasoning every day, but it has never been more explicit than when I was diagnosed with gestational diabetes (GDM) in the last trimester of my pregnancy. 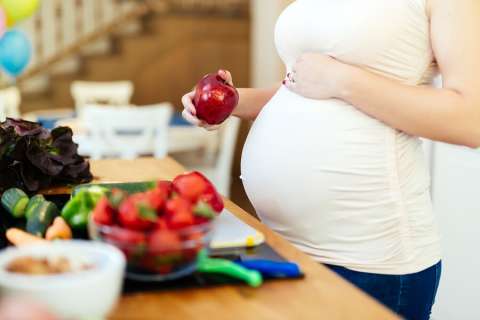 First, I needed to understand the probabilities. After the diagnosis, I was a little shocked since I think of myself as a generally healthy person and diabetes does not run in my family. How did this happen to me? I had been craving a lot of fruit to get me through the hot summer months, so part of my mind thought the extra apples must have thrown my sugar out of whack. I did a little research and learned that between 2-10% of pregnancies in the US develop gestational diabetes3, with the risk going up for mothers over 25 years old (a benchmark I passed a while ago.) So to put things in perspective, the risk of someone my age getting GDM is probably between 1 in 10 and 1 in 20. Unlikely, but not rare.

All throughout the pregnancy, I was faced with risk: 1 in 2500 chance of cystic fibrosis4; 2% chance of heart defect; less than 1% chance of Downs Syndrome.5  Almost an infinite number of other potential consequences to me and baby, although most of these risks are very small. I pictured each one in my head like a bathtub filled with marbles, with only a few bad marbles, and I had to keep drawing from the bathtub over and over. My chances for any one of these things happening was low, but the fact that after all these different draws I got one bad marble…not too hard to believe.

Soon I learned about just how much proportional reasoning I was going to have to do every day.  To manage the diabetes, I had to go on a very strict diet that called for eating a certain number of grams of carbohydrates at specific intervals six times a day.  Each “meal” had a prescribed target of carbs I was supposed to hit (not too high or too low), and if I wanted to eat more than one type of food for the next three months, that meant a lot of math.  Every meal involved planning.  I had to consider the serving size for each carbohydrate-containing food (which is pretty much everything from the bread, fruit, or dairy food groups) and adjust it to get the number of carbs I wanted so that the meal would add up to the target.

For example, in order to plan a reasonably normal lunch:

All of this involved knowledge of how to work with ratios, estimation and mental math, knowledge of measurement units and unit conversions, and comfort with fractions: all math taught in upper elementary and middle school, and precisely the math that most low-numeracy adults are lacking.

In addition, I had to deal with elapsed time, another concept that some adults struggle with. My six meals had to be spaced 2-3 hours apart, with blood sugar readings to be taken 1 hour after each of my three main meals of the day. Depending on my agenda for the day (meetings, travel, errands, and other interruptions), I had to plan, sometimes down to 30 minute intervals, when each of these things had to happen. If I woke up late or missed a meal time (which sometimes happened), my last meal of the day might have to occur at 10 p.m. or later. A few times I had to set an alarm to wake up and eat that final snack. Skipping a meal would have put me at a deficit of carbs for the day (which could cause my blood sugar to fall too low) but eating too soon after dinner could have caused it to spike. Planning was essential.

In 90% of cases, women with GDM go back to normal after giving birth, so I like my marble jar odds on that one, although I will be at increased risk of developing diabetes type 2 later in life.  If I am lucky enough to avoid it, this will only be a short, three month foray into a mild form of the disease that an incredible 9.4% of the US population lives with.6 The percentage goes up (12.6%, or about 1 in 8) for folks with less than a high school education,7 who are also less likely to have the math (and other) skills to manage the disease. The math skills needed to manage diabetes are not advanced, but they need to be deep, flexible, and fluent to allow a person to use them on a day-to-day basis. This experience has brought home to me once again the importance of the work we do in adult numeracy for health equity and justice, and for giving people tools to improve their quality of life.