I’ve always had a love/hate relationship with math.  In school, even though I was in advanced math classes, I struggled to grasp the concepts because teachers didn’t connect what we were learning to real-world applications. To this day, the only things I remember about geometry are the Escher drawings in the book. Consequently, if there’s someone in the room who seems to know more or has some kind of credential like being a math teacher or engineer, I tend to defer to them for the answers because I don’t always trust that I’ll have the correct answer (even though I often do). So it’s no surprise that I’m not a math teacher. However, I am an ESOL adult education instructor teaching students with educational levels ranging from third grade to graduate school but who nevertheless are in the same class together.

The necessity to include math in my ESOL classes became apparent when my Advanced class had to refer to the information in a simple chart in their book to answer questions. Some of my most educated students were giving answers that were not contained in the chart, nor could be found anywhere else on the page.

My idea to connect math to ESOL began with an activity in which students would create charts as a way for them to collect and analyze the data. After pre-teaching topic-related vocabulary, I had the students collect specific information about each other. Modeling as we went, I had them answer a series of questions about their classmates that they would find in their charts such as which language is spoken the most/least, from which countries are the most/least of the students, etc.  Once we got through this activity, I decided to try and expand it to do some percentage work.  That I found to be much more challenging and so I made a mental note to introduce and incorporate percentages in my teaching throughout future lessons as it applied.

One way I did this was in a monthly review of students’ class attendance in both my Intermediate and Advanced classes.  I wanted students to be more aware of their attendance and how it relates to and affects their educational progress.  So, at the beginning of every month, students were given a monthly calendar on which they would track their attendance. At the end of the month, we calculated the total number of classes and they calculated the total number of classes they attended.  Utilizing the symbols we had reviewed in earlier lessons, together we created the formula for calculating their individual attendance percentages which they listed on their calendars.  Half way through the school year, I gave them a line graph of our monthly classes and gave a lesson on how to plot their actual attendance over those months.  Not only did they “get” why they had to track their monthly attendance, but they were able to “see” how their attendance related to the number of classes given to date.  Additionally, by analyzing the attendance data through discussion, the class was able to think about how different events such as illness, work, and weather affected their attendance and whether they needed to do anything different or get some additional help to ensure them having strong attendance through the remainder of the year.

This exercise gave them a real-world application of something they were doing (attending class) as well as a sense of ownership and control of their class attendance. (See sample student chart below.) 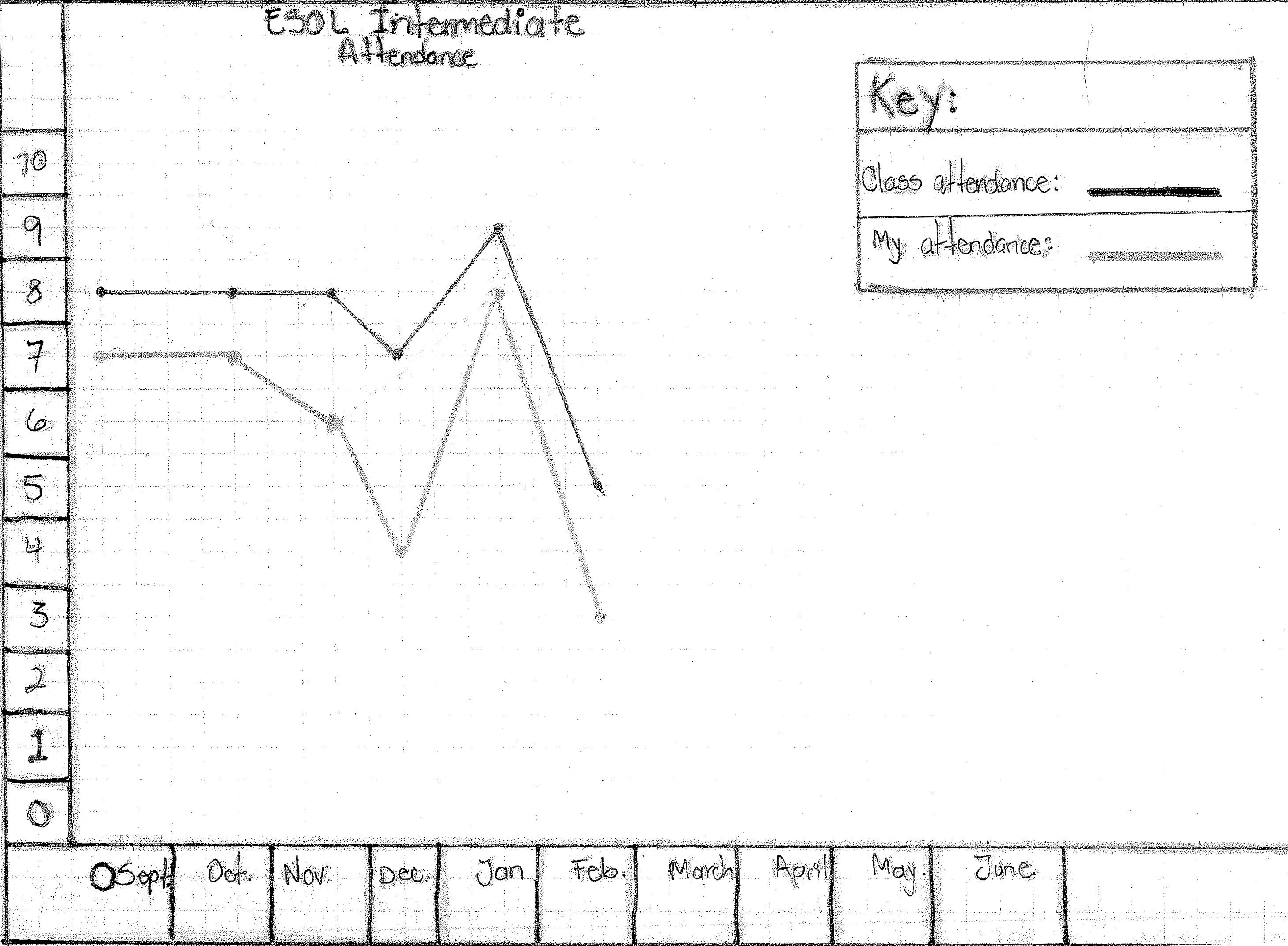 I also found another way to incorporate math into my Intermediate class. When I stumbled upon the fact that students did not know their height or weight in U.S. measurements, it became an opportunity to introduce them to rulers, yardsticks, and measuring tapes. My quilt-maker was teaching those in her group how to use a soft tape measure while my construction guys (who often have low formal education levels) were teaching their classmates how to use a retractable metal one.

Once they had their heights, students added them to the large chart I made for the classroom and we talked about what they saw. They compared their heights to that of their partners, compared the heights of the two gender groups, determined which of the men and women were of similar heights, answered whether 5’6” is greater or less than 5’3” and whether 1 cm is > (greater than) or < (less than) 1 in.

I had students come to the front of the class to be put in order of height by their classmates or to compare back to back who was taller, shorter, or were the same heights.  They loved this activity and they were now able to know their height in both metric and U.S. measurements – and they did some work on superlative adjectives, too!

NOTE: If you do this activity, do not use the men to illustrate shortness because it may embarrass them and shut down the activity. Also, if you have students from cultures where men and women can’t be in close proximity, only do same gender activities.

In both these classes, making things fun AND having real-world application prevented any fear of doing math because the students were focused on finding the answers to questions that were useful and/or interesting to them while enjoying working together with their teams. Real-world application, especially when tied to the students’ experiences, makes for impactful learning.

I recently was asked by a math teacher how I handled situations when students are not engaged in the learning, and I had no answer for him because my students are engaged and interested. Don’t get me wrong, there are times in lessons when this is not the case and that’s when I know I need to find a way to engage them and/or do something more interactive. However, with the math that I’ve introduced to my students, they don’t have the opportunity to not be engaged because it’s very interactive. When students voice concern that they’ve never seen this or don’t understand that, I ask them to be my helpers for modeling the activity or they get paired with someone who has stronger skills. Along the way, everyone gets reminded that they can do this because they are all smart and we are all learning together.

When you set the bar high and tell students that they can reach it, they often believe it and will work toward that goal.

In the past seven years of teaching, I am amazed by what is expected of teachers in adult education. In no other industry that I’ve worked have I seen so many demands on put on the workforce with so little or no compensations or benefits. For this reason, I want to offer a simple an easy way for teachers to connect math to ESOL. While interacting with students, listen and look for those places were a little bit of math could make for some interesting discussions. Is there and opportunity to compare the percent of men and women who like [insert item or activity here]? What about a pie chart when discussing food or showing ½ an apple?

Bring in some math and let the students have fun finding answers to relatable situations. You’ll be surprised that you are connecting math to ESOL and the students won’t even know it. Shhh… let’s not tell them!

Ann Pellagrini began teaching at age 9 in her parent’s sunporch.  After 20+ years working in various management levels in government, high tech and retail, she returned to Education as an adult ESOL teacher where she sneaks in math as often as possible.